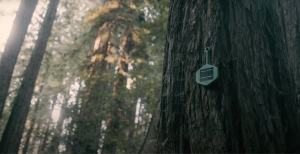 One of Dryad Networks' Silvanet sensors deployed in the forest to provide wildfire protection.

The world is recklessly ignoring the full impact of wildfires, with whole areas of impact completely overlooked, putting us all at risk.

The world needs to wake up to the full impact of wildfires and it is time for governments to shift the focus of investment onto detection and prevention – not just suppression.”
— Carsten Brinkschulte, CEO
BERLIN, GERMANY, January 25, 2023 /EINPresswire.com/ -- The world is recklessly ignoring the full impact of wildfires, with whole areas of impact completely overlooked, putting us all at risk. This is the stark conclusion of a new report, ‘What lies beneath – the hidden truth about wildfire’ published by ultra-early detection IoT company Dryad.

Eight of the worst wildfire seasons on record have occurred in the last decade, and wildfires are becoming more widespread, burning nearly twice as much tree cover today as they did 20 years ago. Yet their full impact remains greatly underestimated. The new report examines the wider, largely unseen impacts of wildfires including:

- full environmental impact
- health hazards on humans and deaths
- financial costs to states and countries
- and crucially, what could be avoided if wildfires were detected a lot earlier.

One of these hidden environmental costs is CO2 emissions that are often omitted from global CO2 inventories. But wildfires are responsible for up to 20% of global CO2 emissions, which is as much as transport, and play a significant and detrimental part in climate change. The report predicts that wildfires could be the source of 30% of CO2 emissions by the end of the century.

Biodiversity is also hit hard during wildfire seasons. Close to 3 billion animals were killed or displaced by wildfires in Australia in 2020 alone, and, in Europe, two thirds of the Plaine des Maures Nature Reserve was destroyed by wildfires in the Gonfaron Fire in France in 2021. The time needed for fauna and flora to recover from wildfires can be measured in decades and not adequately protecting this land is at odds with the landmark agreement of protecting 30% of land by 2030, agreed at COP15 at the end of last year.

Long-term effects on health are revealed as another gap in wildfire impact data, yet inflammation and the exacerbation of asthma, amongst other symptoms, related to smoke and ashes are frequently reported in and around wildfires areas. According to the World Health Organization (WHO), wildfires and volcanic activities affected 6.2 million people between 1998-2017 with 2,400 attributable deaths worldwide from suffocation, injuries and burns.

The financial costs are incredibly high and rank in the billions as shown in a study by University College London examined in the report. California’s 2018 wildfires alone cost the US economy $148.5 billion. Capital losses and health costs within California totalled $59.9 billion.

According to the report, traditional wildfire detection methods are failing to reduce the risks. Most fires are still detected by human sight - a method of detection that has not been updated for decades - which can take up to 6 hours or more to detect a fire. At this point the fire has already grown difficult to control, costing governments billions in firefighting costs. In the US alone, firefighting costs reached 3.7 billion dollars in 2022.

Dryad has developed an affordable and effective technology capable of detecting a fire within the first 60 minutes, even at smouldering stage - before an open fire has developed. Relying on solar-powered sensors and IoT mesh gateways, it can be placed in the most remote locations transmitting the first signs of fire to firefighters with its exact location, revolutionizing response times.

Carsten Brinkschulte, CEO of Dryad Networks comments: “It is clear from the report findings that the world needs to wake up to the full impact of wildfires and it is time for governments to shift the focus of investment onto detection and prevention – not just suppression. Ultra-early wildfire detection is available and affordable – we’ve worked hard to create a sensor that costs less than $50 - if deployed at scale it could help to eradicate nearly all of the impacts of wildfire.”

As an example, during the Black Summer Bushfires in Australia, Dryad estimates that if early wildfire detection had been in place, 5.5 million hectares of land 2,500 homes and 26 lives could have been saved. The cost of this fire to insurers was put at A$1.88 billion with an estimate cost of A$73 billion a year for 30 years to restore the environment destroyed.

Carsten concludes: “There should be no hidden costs for wildfires. All countries must work together to share data communicating the full impacts of wildfires to ensure the extent of damage caused is fully understood. This will unlock the critical level of investment and attention needed on detection and prevention to address the issue of wildfire once and for all.”

For further insights, download the full copy Dryad’s ‘What lies beneath: the hidden truth about wildfires’ whitepaper here.