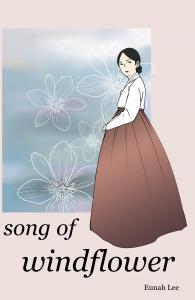 song of windflower by Eunah Lee

FAIR LAWN, NEW JERSEY, UNITED STATES, January 24, 2023 /EINPresswire.com/ -- Author Eunah Chang Lee's debut novel "An Indelible Name" delves into the complexities of war and memory through a deeply personal lens. The book, inspired by the author's own grandmother, explores the resilience and strength of those who have gone through deep sorrow and the complexities of war and memory.

The novel is a tribute to the author's grandmother and the many people who persevered through the chaos of war and the complexities of history. " the souls of those who have gone through deep sorrow flow like a river, with their whole existence becoming deep and clear. There was a string of hope that they would hold onto even in times of sorrow, and it was the strength that made them laugh," says Lee.

The main characters of the novel are not distant strangers but the author's own family and neighbors. "The main character's husband's name is my grandfather's real name. Although most stories are fictional, perhaps that’s one of the reasons why the characters are so real," says Lee.

Eunah Chang Lee's "An Indelible Name" is a powerful and moving novel that explores a story of the personal history of a woman who has endured chaos and the worst events anyone can encounter. It discusses in detail how a woman turned unfortunate situations and memories into a source of hope and happiness. She started by writing novels in Korea. Later she began translating her novels into English for her children, which has now resulted in her novels getting published in English.

Eunah Chang Lee is a married mother of two who has been living away from her motherland for 32 years. Despite this distance, she has never lost her love for her homeland and has dedicated her writing to exploring modern and contemporary history and the ordinary yet extraordinary lives of the common people who lived through it. As a working mother, Lee has had to balance her responsibilities with her passion for writing and has spent 13 years researching and composing her debut novel. Despite the challenges, Lee never gave up and was finally able to publish her novel in June 2020. The novel is a tribute to her deceased grandmother, whose real name is used as the main character, and is dedicated to her mother, who passed away before its completion.