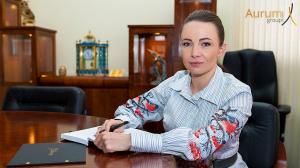 The joint efforts of business, government and the population will help to resist the deepening of the economic crisis in Ukraine - Alona Lebedieva

KYIV, UKRAINE, January 24, 2023 /EINPresswire.com/ -- According to Alona Lebedieva, the owner of the Ukrainian industrial and investment group Aurum, attacks on the energy infrastructure, besides the war, will be the key factors in the deepening of the economic crisis in Ukraine:

Nevertheless, the systemic challenges for Ukraine in 2023, according to Alona Lebedieva, can be effectively overcome only by the joint efforts of the government, business and the population:

“If business trusts the government, entrepreneurs trust each other, and the population trusts business, only in joint efforts will it be possible to effectively overcome the systemic challenges facing Ukraine in 2023.”

As it was previously reported, Alona Lebedieva’s “Aurum” Charitable Fund sent more than UAH 6.5 million to help the Armed Forces in 2022.