New series from Italy, Portugal and Germany make their debut on MHz Choice

WASHINGTON, Jan. 24, 2023 /PRNewswire/ -- In the new Italian drama, The Swan Company (RAI Com), learning music may be the easiest obstacle to navigate as the series follows seven talented musicians at the Giuseppe Verdi Conservatory in Milan. They have talent, but discipline and focus are sometimes at a more amateur level, as they are also teenagers coming of age. Matteo (Leonardo Mazzarotto) is a violinist who is a sensitive newcomer. Barbara (Fotinì Peluso) is an accomplished singer whose ambitions don't always match the expectations from her family. Dominic (Emanuele Misuraca) has effortless talent and finds himself in a love triangle with his new friend Matteo and Barbara. Music becomes a refuge for the insecure cellist Sofia (Chiara Pia Aurora) and shy pianist Robbo (Ario Sgroi), who are foils to the rebellious Rosario (Francesco Tozzi) on the drums. Visually impaired violinist Sara (Hildegard De Stefano) rounds out the seven. The students are a support for each other under the strict tutelage of Maestro Marioni (Alessio Boni), known to his students as "the bastard". The young cast was chosen out of 1800 musicians vying for the roles of conservatory students. 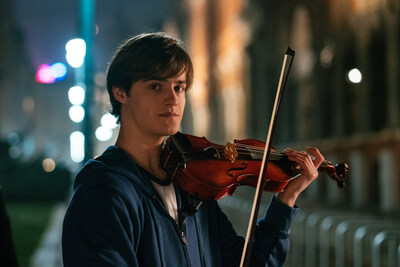 In 'The Swan Company', learning music may be the easiest obstacle to navigate.

German series Irish Crime (Beta Films) centers around criminal psychologist Cathrin Byrne (Désirée Nosbusch) in Galway, Ireland. Cathrin took a 10-year hiatus from law enforcement after the disappearance of her husband Liam, a police officer. His disappearance triggered a spiral into alcoholism and despair for Cathrin which led to her 14-year-old son Paul being raised by his grandparents in Germany. Fast forward 10 years later - Cathrin has a private therapy practice and Paul (Rafael Gareisen) is back in Galway as a crime scene photographer. The sudden discovery of Liam's remains thrust Cathrin back into law enforcement and in closer proximity to her son Paul.

February also brings more French films into the fold with a trio of romantic movies with the second season of Love In (Newen). Also returning to MHz Choice in February are new seasons of two long-running crime dramas: Alice Nevers (Mediawan), an audience favorite in France, and Inspector Rex (Austria, Beta Films).

MHz Networks offers viewers in the U.S. and Canada access to a library of the best television mysteries, dramas, comedies and documentaries subtitled in English through its subscription streaming service, MHz Choice. Select MHz Networks content is also available on DVD and on its free ad-supported service MHz Now, available on Samsung TV Plus, Plex, TCL and Stremium. New MHz Choice customers receive a free 7-Day Trial. For more information, go to mhzchoice.com.

For inquiries or corrections to Press Releases, please reach out to Cision.
✕
× Close Ad